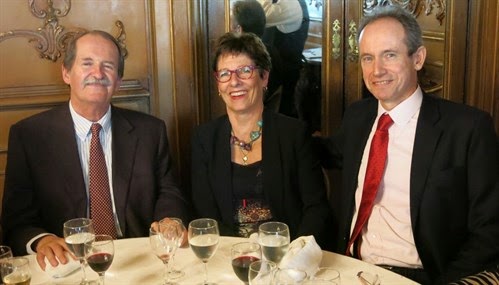 What an event!  This was a major celebration which took place at the exquisite Portuguese literary Club, the Grémio Literário in the Chiado, downtown Lisbon, on 13th March 2014.
It was a formal lunch, attended by the Duke of Bragança, and by the British Defence Attaché to Portugal, Commander James Lowther and over 55 other members and guests of the thriving Royal British Club in Portugal.  It was held in the gleaming Louis XVI dining room of the Grémio which was packed to capacity.  The panoromic views from this Club look over Lisbon, down the hill to Praça de Comércio and the Tagus.
The Chairman of the Club, Philip Portal, welcomed everyone and introduced everyone to the reciprocal arrangement which the Royal British Club has entered with the Grémio Literário. This will be one of many such lunches and events at the Grémio and its members are now entitled to the use of its premises and facilities.
He then introduced Executive Committee member Miguel Carvalho Cerqueira, who has continued his family tradition of belonging to the Grémio Literário. Miguel gave an excellent exposé of the Club, of its history and of his hopes for the Royal British Club's involvement over the coming year.
This is one of many events on the RBC calendar for this year: on April 1st there will be a cocktail at the Estoi Palace in the Algarve, hosted by the Club's President, Her Majesty's Ambassador to Portugal, Jill Gallard.  Every month there is a Happy Hour cocktail in Cascais as well as other networking, social and cultural events. This year for example in addition to the regular lunches there will be a wine and cheese tasting event in May, a visit to a cork estate to see the cork stripping in action and a day's trip to one of the most lively ancient Portuguese hunting lodges.
Royal British Club
Publicada por Real Associação do Médio Tejo
Publicada por Maria Menezes à(s) 12:25