Dom Duarte, Duke of Bragança and head of the Portuguese Royal Family, visited the town of Salvaterra de Magos, near Santarém, north of Lisbon. The duke went to the village to open an exposition about the royal history of the village on saturday.
This history dates back to April 1383, when the marriage contract between Princess Beatrice of Porugal and King John I of Castile and Léon was signed in the town. This treaty ended the Fernandine wars. Beatrice was the only daughter of King Ferdinand I of Portugal and Leonor Teles de Menezes, one of the great villains of Portuguese history. Leonor’s nickname ‘the traitress’ indicates why she and her daughter were kicked out of Portugal in 1383: the Portuguese wanted to stay independent from Castille.
In 1542 the village was transferred to Prince Dom Luís of Portugal, Duke of Beja, second son of King Manuel I and Maria of Aragon. Although the prince never married, he did get an illegitemate son: António, prior of Crato. The prior was one of the claimants to the Portuguese throne after King Sebastian died at the battle of Alcácer Quibir. In 1580 he was crowned King in Santarém. He only reigned for 20 days, after which the armies of King Philip II of Spain – who claimed the Portuguese crown for himself- forced António to flee to the Açores Islands. Although he fled with all Portuguese crown jewels, he died in  poverty in France in 1595.
Dom Luís transformed the village to suit his royal tastes and built various royal buildings. In the 17th and 18th century the village was mainly used by the Portuguese king to indulge in falconry. King José I enlarged the royal palace in the village and also built an opera house. Sadly in 1824 a fire destroyed the royal palace, bull ring, gardens and opera house. Only the royal chapel and the falconry remained.
It was in this falcory school that Dom Duarte opened the exhibition about the royal history of the village. The event was attended by the local mayor and by monarchists form the province of Ribatejo. 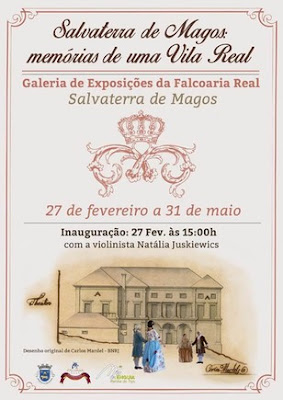