She is living history: Infanta Dona Maria Adelaide de Bragança van Uden was born on 31st January 1912 as the youngest daughter of [King] Miguel (II), Duke of Bragança and Princess Maria Theresa of Löwenstein-Wertheim-Rosenberg in Saint-Jean-de-Luz, France, and is the last surviving granddaughter of a Portuguese monarch, King Miguel I of Portugal and his wife Princess Adelaide of Löwenstein-Wertheim-Rosenberg. Her godparents were King Manuel II, the last reigning King of Portugal, and his mother, Queen Amélia of Portugal, née Princess of France of the House of Bourbon-Orléans. 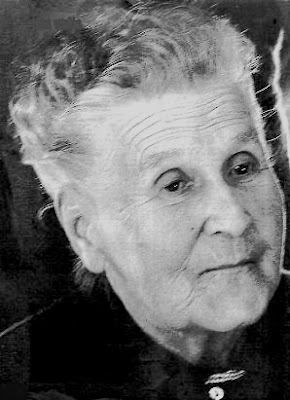 She was educated in the Sacré Coeur College in Riedenburg, Austria, married in Vienna, 13th October 1945, Dr. Nicolaas van Uden (Venlo, 5th March 1921 – Lisbon, 5th February 1991) a medical biochemist and a great scientific authority in the field of yeast development.
Infanta Maria Adelaide lived in Vienna, Austria, working as a nurse and social assistant. During World War II, when there were bombardments, she was travelled at night to the place to provide aid to the victims. She was part of the Nazi resistance movement, caught by the Gestapo and sentenced to death. Portugal's dictator António de Oliveira Salazar intervened with the Germans, claiming that Infanta Maria Adelaide was a "national heritage". The intervention of the Portuguese diplomacy resulted in the release and her immediate deportation, which settled in Switzerland. It was there that her brother Dom Duarte Nuno, Duke of Bragança, and sister-in-law Dona Maria Francisca , Duchess of Bragança, lived. After the war, the family finally returned in Austria. In 1949, Dona Maria Adelaide could return to her ancestors' home country, Portugal.

According to the official succesion list Infanta Maria Adelaide is 6th in line to the Portuguese throne.

On January 31st 2012, Infanta Maria Adelaide will celebrate her 100th birthday, she is the sole surviving granddaughter of King Miguel I of Portugal. 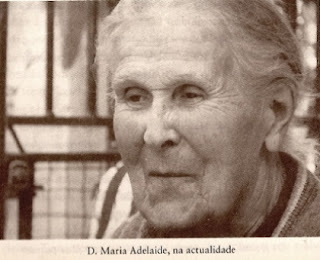 Infanta Maria Adelaide is the daughter of Miguel II, Duke of Bragança and Princess Maria Theresa of Löwenstein-Wertheim-Rosenberg, and was born January 31st 1912 in Saint-Jean-de-Luz, France, with Dom Manuel II and Queen Amelia as her godparents. The Infanta, along with her siblings and parents, spent her early life in Seebenstein, Austria, in fairly good conditions until the Austrian Monarchy collapsed due to World War I. The Braganças lived tough times and had to wait on line for food with the masses of people, not afforded any special privileges for their royal titles. The Infanta said she never went hungry because she was young, but that her older siblings including Duarte, Duke of Bragança (Duarte Pio’s father) did go hungry many times.
Even with all the difficulties she went through in her young life the Infanta always strived to help others. She wanted to become a nurse and went to study nursing in Vienna, where she lived in university housing while completing her degree. When Nazis occupied Vienna, Maria Adelaide joined the Nazi Resistance movement and offered care to war victims, because of this she was jailed and sentenced to death by the Nazis. Salazar, the Portuguese Prime Minister at the time, intervened and had her set free. Throughout this time she met a medical student, Nicolas van Uden, whom she married October 13th, 1945 in Vienna.

The couple had six children: Adrian Sergio in 1946, Nuno Miguel in 1947, Francisco Xavier in 1949, Filipa Teodora in 1951, Miguel Inacio in 1953 and Maria Teresa in 1956, all with the surname “de Brangança van Uden”. The young couple thought of moving to Africa, but where convinced by members of her family to move to Portugal, which she did in 1949, with special permission from Salazar, as the Banishment Law which banned all members of the Bragança dynasty from entering Portugal was not repealed until a year later.
In Portugal, her husband worked in scientific research, and she started the Dom Nuno Alvares Pereira Foundation. The foundation is aimed at helping poor mothers and pregnant women and abandoned and orphaned children. She is known amongst all to be a caring and selfless person, always putting others before herself. Due to this special anniversary, the President of the Republic has conceded the Order of Merit to the Infanta for her dedication to other along her whole life.
On January 31st there will be a mass at the Church of Bom Sucesso to celebrate the Infantas life, followed by a dinner at the Cultural Center of Belem. The dinner and mass are open to the public with the dinner having a fee of 20 euros for all who want to attend.
Royal Forums, January 31st 2012
-----------ooOoo--------- 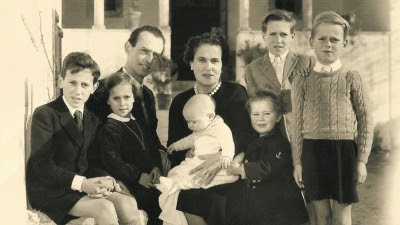 HRH Infanta Maria Adelaide Manoela Amelia Micaela Rafaela of Portugal celebrates her 100th birthday. The youngest of the eleven children of Dom Miguel de Braganza, Infanta Maria Adelaide was born on January 31, 1912 at St. Jean de Luz, France. (Dom Miguel had four children by his first wife, Elisabeth of Thurn und Taxis, who died several weeks after giving birth to a daughter in 1881. He married in 1893 for a second time to Princess Marie Therese of Löwenstein-Wertheim-Rosenberg.)
Adelaide was named for her paternal grandmother, Princess Adelheid of Löwenstein-Wertheim-Rosenberg.
During the second world war, the family lived in Vienna, where the infanta worked as a nurse. She was active in the Resistance movement, arrested and was sentenced to death by the Gestapo, after being accused of listening to the BBC. But the Portuguese dictator, Antonio Salzar intervened on the Infanta's behalf, stating that she was someone of national heritage. Infanta Maria Adelaide was a granddaughter of King Miguel. She was also apparently active in a group called O5, where her code name was Mafalda. The group helped to hide Jews from the Nazis.
Thanks to Salazar Maria Adelaide was released and deported to Switzerland, where her brother, Dom Duarte Nuno, Duke of Braganza lived with his wife, Maria Francisca.
After the war, Infanta Maria Adelaide and her family returned to Vienna.
On October 31, 1945 at Vienna, Infanta Adelaide married Nicolaas van Uden (1921-1991), a Dutch national. She and her new husband planned to go to Africa, but after being allowed to return to Portugal before the repeal of the ban against her family, the plans to move to Africa were dropped.
In 1949, Infanta Maria Adelaide and her husband, a doctor specializing in skin diseases, were able to move to Portugal. Unfortunately, Dr. van Uden's medical degree was not recognized in Portugal, and he could not practice medicine. For many years he worked for in a research laboratory and other scientific foundations in Portugal.
Infanta Maria Adelaide and her late husband have six children: Adriano Sergio, Nuno Miguel, Francisco Xavier, Filippa Theodora, Miguel Ignacio, and Maria Teresa.
Her nephew, the Duke of Braganza, is the current head of the royal house of Portugal.
For more information about her role in the resistance, see the book, The Hand of Compassion: portraits of moral choice during the Holocaust by Kristen Monroe.
Yesterday, the Infanta's family celebrated her life with a Mass of Thanksgiving at the Church of Alvalde do Sado. Two of her children, Nuno and Maria Teresa van Uden attended the service.
"These honors are a way to convey what she thinks, fears and makes proposals for the future, passing by Christian values," Nuno van Uden told a reporter.
Today, the Portuguese president conferred the Order of Civil Merit on Infanta Maria Adelaide. She is, according to the official statement, "an example of life by moral stature."
Royal Musings, 31 de Janeiro de 2012
Publicada por Maria Menezes à(s) 16:52